Books may be the last frontier of the digital age, most of their pages unscanned, and unsearchable on the Internet. Instead, they’re on library shelves, far from the reach of a Web browser. 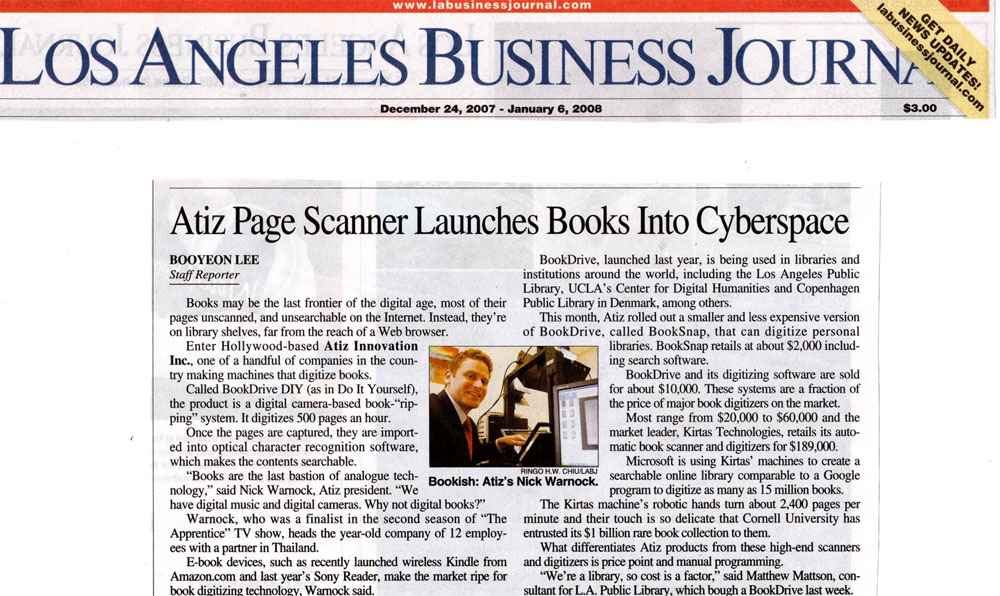 Enter Hollywood-based Atiz Innovation Inc., one of a handful of companies in the country making machines that digitize books.

Called BookDrive DIY (as in Do It Yourself), the product is a digital camera-based book-”ripping” system. It digitizes 500 pages an hour.

Once the pages are captured, they are imported into optical character recognition software, which makes the contents searchable.

“Books are the last bastion of analogue tech- Bookish: Atiz’s technology,” said Nick Warnock, Atiz president. “We have digital music and digital cameras. Why not digital books?” Warnock, who was a finalist in the second season of “The Apprentice” TV show, heads the year-old company of 12 employ-ees with a partner in Thailand.

BookDrive, launched last year, is being used in libraries and institutions around the world, including the Los Angeles Public Library, UCLA’s Center for Digital Humanities and Copenhagen Public Library in Denmark, among others.

This month, Atiz rolled out a smaller and less expensive version of BookDrive, called BookSnap, that can digitize personal
libraries. BookSnap retails at about $2,000 including search software.

BookDrive and its digitizing software are sold for about $10,000. These systems are a fraction of the price of major book digitizers on the market. Most range from $20,000 to $60,000 and the market leader, Kirtas Technologies, retails its auto-
matic book scanner and digitizers for $189,000.

Microsoft is using Kirtas’ machines to create a Nick Warnock! searchable online library comparable to a Google program to digitize as many as 15 million books.

The Kirtas machine’s robotic hands turn about 2,400 pages per minute and their touch is so delicate that Cornell University has entrusted its $1 billion rare book collection to them.

What differentiates Atiz products from these high-end scanners and digitizers is price point and manual programming.

“We’re a library, so cost is a factor,” said Matthew Mattson, consultant for L.A. Public Library, which bough a BookDrive last week.

RSS feed for comments on this post. TrackBack URI